‘Christmas in the Capital’ launched

Christmas in the Capital is the Valletta Cultural Agency's Christmas programme starting on the 25th November with 25 events in 25 days.

Minister for the National Heritage, the Arts and Local Government Owen Bonnici, together with Valletta Cultural Agency (VCA) Chairman Jason Micallef, announced a programme of festive events taking place in Valletta from the 25th of November till the 31st of December 2022 titled ‘Christmas in the Capital’, with 25 events in 25 days.

During a press conference, Minister Owen Bonnici said that Christmas in the Capital is an opportunity for Maltese and Gozitan families to visit the capital city during the Christmas period.

“Our capital city, one of the smallest capital cities in Europe, is the perfect place for such celebrations. This programme builds on our commitment to celebrate culture in its various genres and continue to support artists, and we are committed to continuing promoting cultural activities in the capital city and in the various localities in the country”, stated Minister Bonnici.

VCA Chairman Jason Micallef said that this Christmas they are welcoming families back to Valletta with events and activities planned over a month. He invited the audience to enjoy the programme’s events including marching bands, street walkers, choirs, and music performances by several popular groups including The New Victorians, MARA, Centrestage, Klinsmann, Tikka Banda, the Big Friends Guggen Musik, Tikka Banda and Sterjotipi, among others. Jason Micallef highlighted that for the first time since the pandemic, the national New Year’s Eve Celebrations will once again be held outdoors, in the centre of the capital in St George’s Square.

On the 25th of November, the Christmas lights and Christmas trees will be switched on in Valletta’s main areas while a traditional Christmas crib will be inaugurated near the entrance to St John’s Co-Cathedral. The much-awaited, spectacular projections in St George’s Square start from the 7th of December. Throughout the Christmas period, Christmas music will be playing in Republic Street.

Opening Doors, Amber, Sean Borg and Veronique Vella, the Jackson’s Żaqq u Tanbur Folk Group, Franklin, Dancel Dance Studio and a children’s puppet-making workshop by Sarah Galea and Caroline Curmi, are among the Christmas in the Capital programme highlights.
The well-established New Year’s Eve celebrations close festivities on a high note with a large-scale spectacle of music and the countdown. More details will follow in the upcoming days. 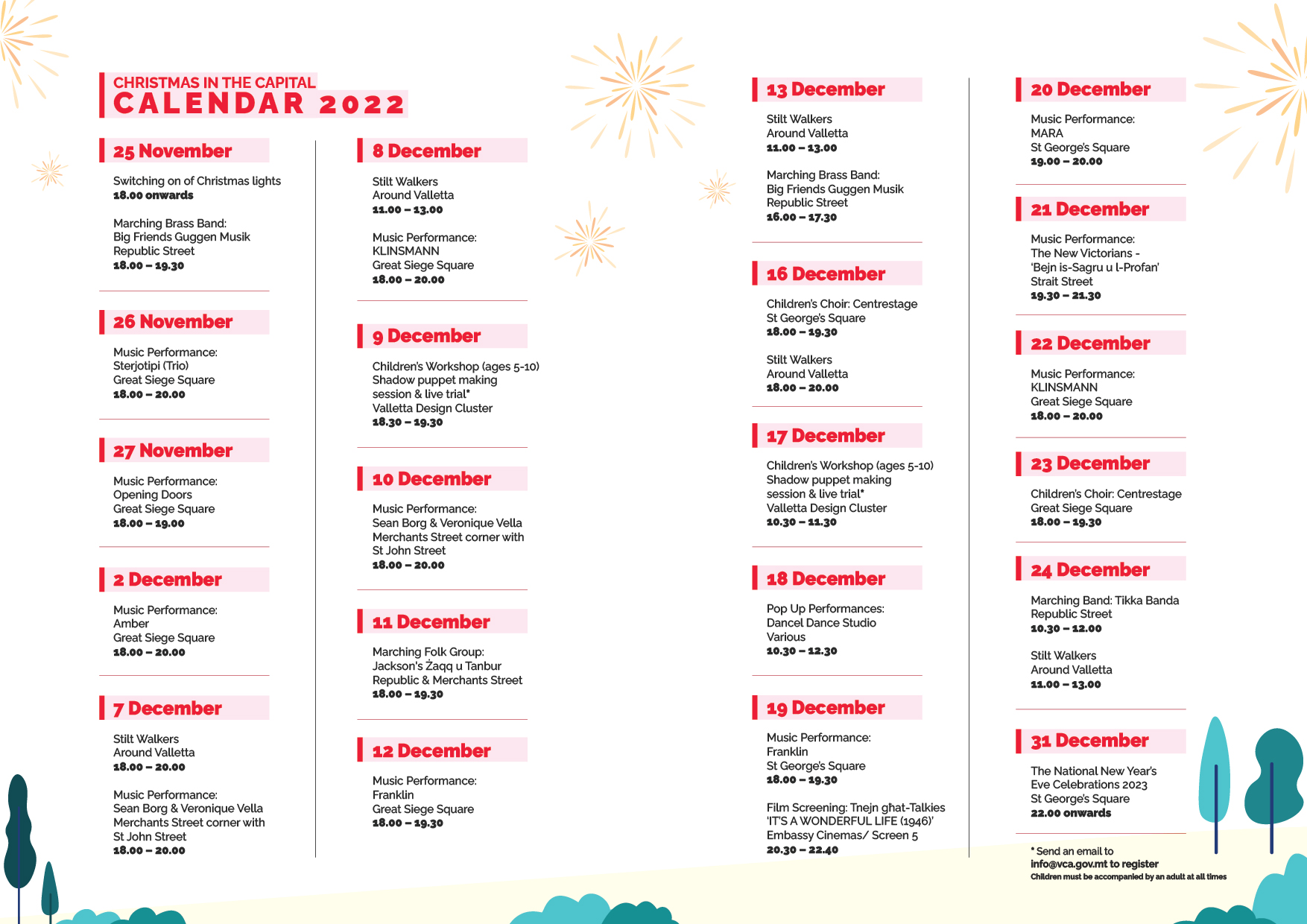 Don't miss our future updates.
Subscribe to our newsletter!